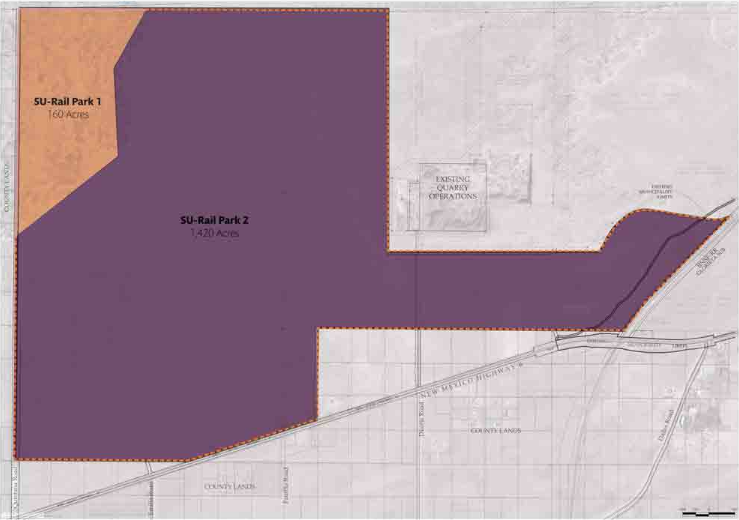 The Central New Mexico Rail Park will soon be open for business in Los Lunas. Strategically located for multi-modal transportation west of Interstate 25 in Los Lunas, the industrial rail project is gaining momentum.

The developers of the park, RIO Real Estate Investment Opportunities, LLC, signed an agreement with Black Gold Terminals to manage operations at the rail park. Black Gold Terminals, a premier transload service that provides customers with on-demand switching, loading and unloading, is a subsidiary of Blacklands Railroad of Texas.

“I think this is the first step of a larger opportunity for New Mexico,” said RIO partner Tim Cummins. The developers hope to bring rail cars into the park between December and February. “We really see this as a part of the larger opportunity for New Mexico, which is transportation,” Cummins said. “We believe our park can be a potential access into the commerce that goes through New Mexico on the transcontinental line of BNSF.”

The CNM Rail Park has the potential to create opportunities not just for the park but expanded air freight, trucking and other ventures that can grow out of this, he said. The project was developed by Rio Real Estate Opportunities to provide rail service for New Mexico and other states, and move manufactured and other goods into and out of the state.

It started on Dec. 28, 2016, when ground was broken on the 1,400-acre site in the San Clemente Land Grant area. Then in the summer of 2017, Burlington Northern Santa Fe Railway Company certified the site and installed a rail switch and spur to allow rail cars to enter the property. Some of the funding for the rail spur was provided by a $400,000 LEDA grant from the Bernalillo County Commission, who see the project as a boon to the whole region. It will generate all types of jobs, including heavy equipment operators, truck drivers, shipping and warehouse positions, assembly and manufacturing jobs.

Cummins compared the 500-acre Los Morros Business Park, saying the rail service is three times larger. The project is estimated to be around a $25 million enterprise. They are currently extending track into the park and the developers expect to have that portion of the track ready for operations as early as December and no later than the first quarter of 2019, Cummins said. This is the piece of rail park infrastructure that allows companies that need rail service to locate there.

“So it’s a huge step,” he said. “It completes our infrastructure for access to the park for businesses.”

The RIO group is gearing up for greater marketing to warehouse distribution, manufacturing and fulfillment centers. At full build-out, the project is expected to generate 3,000-5,000 jobs, Cummins said. Earlier this month, Los Lunas received a $1.3 million U.S. Department of Commerce grant to install a 21,000-foot potable water pipeline that will run along N.M. 6 to the western edge of the village and the 1,400-acre Central New Mexico Rail Park.

“We hope to have the water in by the first part of next year,” Cummins said. “The timing of the water being available probably lines up with when the first buildings would be out there, so it all lines up pretty nice.”

He said they’ve been working on the rail park project for 12 years.

“What’s kind of nice from our team standpoint is several things are coming together all at once,” Cummins said. “In business, there are new points of beginning. Being operational is part of a new beginning where now we start the next step which is bringing in all those job related companies, so I’m excited.”